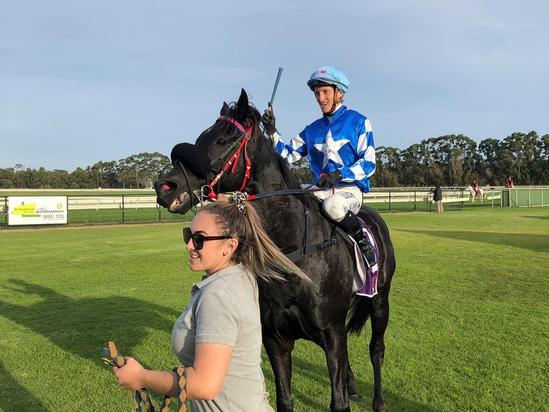 The former $500,000 yearling, who began his career in Sydney with Chris Waller before a transfer to Perth-based trainer Trevor Andrews two years ago, had settled in nicely to his new surroundings and had trialled well at Albany on April 12, before being lifted over the line by an in-form Andrew Castle this afternoon.

Beginning brilliantly and settling in the box seat, Apollo took full advantage when a rails run presented itself on straightening, sprinting quickly to share the lead, before coming out on top in a thrilling two-horse war with Sea Spring, getting his nose in front right on the line.

It was the second leg of a winning double for Team Wolfe after War Jeune won Race 5 on the card, and provided us with a bit of a buffer in the race for the Albany Stock Feeds-Great Southern Trainer Premiership.

We are now 2.5 wins ahead of Roy Rogers with two meetings to go in an exciting tussle for Leading Trainer honours. Rogers got within a half-win after Soramimi and Notta Mocha won Race 2 and Race 4 respectively, but War Jeune and Apollo's triumphs, allowed us to end to day with our noses in front.

The battle should provide a bit of colour and excitement for the final Great Southern 2018/19 meetings at Albany on Thursday May 2 and Sunday May 12.